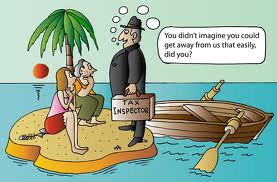 1. How can multinationals abuse tax treaties?

2. A Congressional Report this year estimated that multinationals avoid $100 billion in US tax in 2014.

3. How to counter treaty abuse?

A) Actually state that preventing tax evasion and avoidance are also the main purpose of a treaty.  Not just avoiding double taxation!

B) Limit benefits if a transaction is artificial and does not make any economic or business sense.

4. But careful, we don’t want to be too picky - there are valid commercial reasons for some tax arrangements!

AND NOW FOR YOU TAX ENTHUSIASTS:

The BEPS project, in particular, Action 6 - Preventing Treaty Abuse - aims to tackle this. It has identified these examples of treaty abuse:

Two states enter into a double tax convention to avoid double taxation. Because of domestic rules in each state, a multinational could find itself non tax resident in both states. And so, it avoids paying tax in either state. This is called double non-taxation.

You may have companies that break down major projects into several smaller contracts. Each mini-contract lasts fewer than 12 months.

Most tax treaties consider a business a permanent establishment if they have operated for at least 12 months.

The company can claim to have no permanent establishment at all in that state and so, escape tax.

The project will also address this example of treaty abuse in Action point 7 - Prevent the artificial avoidance of PE status.

Why is treaty abuse a specific concern for BEPS?

This is because it leads to double non-taxation, using a third country that is not related to the multinational’s operation.

Now, you have entities that do not allocate the correct income in line with their business activity in a country. For example, in the US alone, a Congressional Report this year estimated that multinationals avoid $100 billion in tax in 2014.

How has the BEPS plan progressed in Action 6 so far?

The OECD published a discussion draft on 21 November 2014. This draft provided potential solutions, in particular:

States who are in the tax treaty should write a clear statement at the beginning of the treaty.

This would state that beyond avoiding double taxation, both states intend to:

The USA is an example which applies a “Limitation of Benefits” clause in its tax treaties. You set out criteria when an entity can make use of tax advantages. For example, you may have criteria according to:

- Take into account the economic reality of a transaction, not just its legal form.

With this, the OECD aims to stop artificial arrangements which have no apparent commercial or investment reality.

The principal purpose of a tax treaty is to make sure that a person or entity is not taxed twice: - on the same income on two taxpayers (economic double taxation) - on same taxpayer, but by two different states (juridical double taxation) A transaction or arrangement is artificial.

It goes against the original purpose of the tax treaty. Then a revenue authority can deny benefits of that treaty. How this test applies relies heavily on how you interpret the treaty. This would tackle types of abuse, such as conduit financing arrangements.

This is an entity that issues securities such as short term loan notes. It later uses the proceeds to invest in long term assets.

If you applied a Principal Purpose Test, the revenue authority may deny the benefits of the treaty. They could apply withholding tax on the payments. That may be true if the funds invested flow out of the entity, leaving few earnings in the Netherlands.

However, you could have funds which genuinely represent foreign direct investment in the country. So, it is not clear whether a genuine investment would fail the Principal Purpose Test. You can see how the test does become highly subjective.
The BEPS Action plan proposes:-

Ernst & Young echoed concerns about the Principal Purpose Test, in their public comments on this discussion draft.

They added: “This test is vague and would add uncertainty to the treaty by introducing a subjective standard that would be difficult to evaluate and administer in practice because it is dependent on the intent of the taxpayer.”

In their reply to the same public consultation, the British Accounting Association, ICAEW, voiced concerns on the Limitation of Benefits provisions. A trust in a common law country could be denied benefits if they invest in a civil law country.

This is because the trust, whose main purpose to invest funds, may be considered a partnership. You then might have a conflict in interpreting who qualifies for these benefits in a tax treaty. The public comments generally voices unease of unintended consequences.

Mainly, it highlights denying treaty benefits when there is a legitimate business reason.

As I write this, the OECD will publish a revised discussion draft for BEPS Action 6 on 22 May. The public can scrutinise this and voice their concerns for 30 days.

The Action plan and its aims to prevent treaty abuse lack detail. You can only sense this from the feedback from the public consultation. I would like to see more practical examples of how the BEPS plan would apply these tests. “Preventing treaty abuse” also refers to other Action plans 2, 4, 5, 8, 9 and 10.

Why not break down this and include them in other Action points? In part C of the discussion draft, you have a section that deals with “permanent establishments located in third States”.

You could have a better focus if you include this in Action 7 - preventing the artificial avoidance of permanent establishment status.

Technicalities aside, it is actually positive that the OECD is consulting widely. You have comments not only from tax professionals but also business sectors.

You could equally argue that these groups are interested in keeping the current situation. You do not have much representation from ordinary global citizens.

The complex, technical and academic nature of the document seem far removed from the man in the street. Ultimately, this could fuel misunderstanding and resentment with the general public.