The Base Erosion and Profit Shifting (BEPS) debate 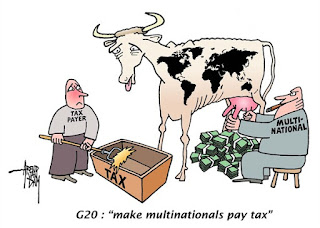 The Base Erosion and Profit Shifting (BEPS)
debate

1. The Organisation for Economic Co-operation and Development (OECD) have started a project to combat tax avoidance called Base Erosion and Profit Shifting (BEPS).

2. There has been public outcry at multinationals' low tax bills

4. Example: the BEPS project has a plan to counter multinationals deducting too much interest from their tax bill.

5. Outside the project, countries have already ploughed ahead with their own steps to combat tax avoidance.

6. The BEPS project is off to a good start, but will tomorrow's economic reality overtake the new tax landscape?

AND NOW FOR YOU TAX ENTHUSIASTS:

In November 2012, political leaders at the G20 tasked the OECD to draft a plan to combat international tax avoidance. They were responding to public mood and that is how the BEPS project started.

In her lecture on International Taxation, Manal Corwin reflects on this public outcry. The debate in the media has not helped. Sometimes, the media and the public have misunderstood the debate on tax avoidance.

Tax planning is a legitimate way to reduce a company's tax bills. Tax is a cost to a business like any other. And a company has a duty to get the best return on investment for its shareholders.

Meantime, this has caused untold damage to multinationals’ reputation. In the long term, this cannot be good for anyone.

Recent developments in the BEPS project

In 2013, the G20 countries and the OECD approved a 15 point action plan to tackle BEPS. I will now focus on one particular issue of interest payments.

At present, you have a situation where a parent company funds its subsidiaries through loans. The interest received by the parent on the loan is treated as non-taxable in one country.

Action Plan 4 of the BEPS project addresses this.

You already have existing rules in place such as:

- thin capitalisation rules - you have a deduction limit for interest based on the company’s mix of debt and equity. If the interest charge exceeds a particular ratio of debt-to-equity, it will not be deductible.

- caps on interest deduction - you might have a deductible interest limit of 30% of a company’s operating profit.

The action plan proposes a so-called formulary approach to interest charges. A multinational would calculate a group-wide interest charge according to a third party interest charge. It will then allocate this to each subsidiary.

How have other countries tackled tax avoidance?

While the BEPS plan continues, countries have taken their own steps to combat tax avoidance:

- UK’s diverted profit tax on large companies - it’s a new 25% tax rate on profits diverted from outside of the UK.

- Belgium’s “fairness tax” - in 2014 - Belgium introduced this to counter generous tax incentives from its “notional interest deduction” and carry forward losses. These tax incentives could effectively reduce a company’s taxable income to nil.

- Minimum Alternate Tax - you already have this tax in certain jurisdictions, such as in India. They are aimed at large corporations. The tax represents a percentage of adjusted accounting profit. You then compare this to the actual tax liability.

Whichever is higher becomes the tax bill. However, the tax authority gives a tax credit. That represents the difference between the minimum tax paid and the normal tax liability. The company can offset this credit against its tax liability in future years.

Is the BEPS plan effective?

The BEPS plan is a good starting point. It contains many measures and it has consulted widely with governments, the tax profession and the business world. It does begin to address some of the public’s concerns that multinationals are not paying their fair share of tax.